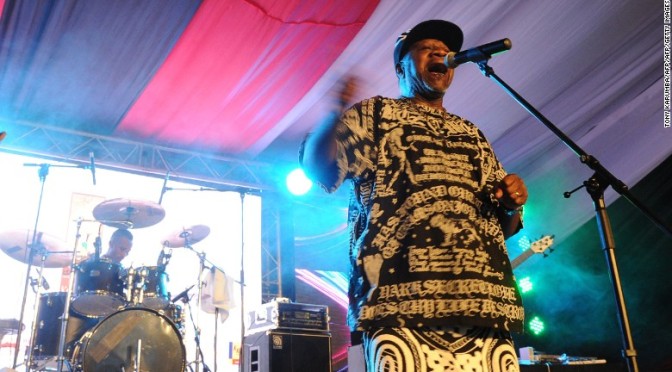 Last Wednesday, Papa Wemba, one of Africa’s most flamboyant and popular musicians, was finally laid to rest, after his sudden death during a music festival in Ivory Coast.

The artist was performing Saturday night at the Urban Music Festival in the capital, Abidjan. He collapsed on stage and later died.

Papa Wemba, 66, was considered a Congolese icon and world music star after merging his Central African heritage with Western pop, rock and rap. His style earned him the nickname “King of Rhumba Rock.”

Papa Wemba said he was inspired by his parents, who took great pride in dressing up on Sundays in the ’60s, “always well-put-together, always looking very smart.”

But in the era of Joseph Mobutu, Papa Wemba wanted to challenge the status quo, so he devised the acronym SAPE, roughly translated from the French for “the society of atmosphere-setters and elegant people.” He dressed his band, Viva La Musica, in the style, and fans across Africa soon followed suit.

With his dynamic vocals and flamboyant personality, Papa Wemba played an essential role in the evolution of Central African music. This is because Wemba successfully fused African traditions with Western pop and rock influences.

Who was Papa Wemba?

Papa Wemba was born Shungu Wembadio Pene Kikumba in June 1949 in Lubefu, in what was then the Belgian Congo.

He was considered one of Africa’s most influential musicians and pioneered modern Congolese soukous music, which spread through the continent.

In a career which spanned over four decades, he collaborated with stars like Peter Gabriel and Stevie Wonder.

Born in the Kinshasa region of what was then the Belgian Congo and now the Democratic Republic of the Congo, Wemba was taught that he was descended from a long line of BaTetela warrior chieftains. His mother, a professional mourner who sang at funeral wakes, had a profound influence on his singing. He is remembered in the late-1990s interview to have mentioned that, “If mother was still alive, I would be rich in words and rich in melodies. She was my first teacher and my first audience.”

Actually Wemba didn’t begin singing until joining the choir of a Roman Catholic Church after the death of his father, a chief of customs, in 1966. The experience sharpened his abilities to sing in minor keys.

Having helped to form Zaiko Langa Langa in 1969, Wemba remained with the group for four years. During that time, the group went from playing American R&B to focusing on traditional Central African dance music. Their hits included several Wemba-penned tunes, such as “Pauline,” “C’est la Vérité,” “Chouchouna,” and “Liwa Ya Somo.”

Leaving Zaiko Langa Langa in 1974, Wemba formed the first bands of his own, Isife Lokole and Yoka Lokole. Both groups used the lokole, a hollow tree trunk played with two sticks, as a rhythmic foundation. Moving to the village of Molokai in the center of Kinshasa’s Matonge district in 1977, Wemba formed his most successful group, Viva la Musica.

Wemba then appeared frequently on state-sponsored television, talking about the influence of traditional music. From the beginning, Viva la Musica’s reputation was built as much on their passion for designer clothes as their music. Fans inspired by the band’s style of dress began dressing similarly and were known as “La Sape,” taken from the expression, “La Société des Ambienceus et Ces Personnes d’Élégance.” Viva la Musica were extremely popular among the Congo’s youth. Their first year climaxed with the Kinshasa newspaper, Elima naming the band best orchestra, Wemba best singer, and their single, “Mère Supérieure,” best song. Over the next three years, the group continued to record hit singles, including “Moku Nyon Nyon,” “Nyekesse Migue’l,” and “Cou Cou Dindon.”

By the late 1970s, determined to capture a European following, Wemba and Viva la Musica vocalist Rigo Star took a six-month leave from the band in 1979 to join Tabu Ley Rochereau’s group, Afrisa International. Relocating to Paris in the early ’80s, Wemba formed a second version of Viva la Musica. While this group took a more Westernized approach, the original band continued to perform indigenous-based music. Wemba explained, “My original group is there for me Zairian fans who come to hear typical African sounds but when I decided to be a singer with an international name, I formed another group to appeal to a different public.”

Wemba appeared in the late 1980s musical extravaganza, Africa Oye!, and toured as the opening act for Peter Gabriel’s Secret World tour in 1993. He received a best artist Kora Award at the first All Africa Music Awards ceremony three years later. Wemba continued to fuse the musical traditions of his homeland and Western pop. His 1995 album, Emotion, was produced by Stephen Hague of Pet Shop Boys, Erasure, and New Order fame. He continued to record and perform regularly until last week when he died at the age of 66, after being stricken while on-stage in Ivory Coast.

In February 2003, Wemba was suspected of being involved in a network that had allegedly smuggled hundreds of illegal immigrants from the Democratic Republic of the Congo into Europe. At that point he was arrested in Paris and held while awaiting a trial. He then spent three-and-a-half months in prison until a €30,000 bail was posted [some reports claimed it was paid by the Congolese government]. Wemba was released in June 2003.

The singer claimed to have undergone a spiritual conversion in jail and even recounted this episode on his album Somo Trop [released in October 2003]. On the song “Numéro d’écrou”, he recalled the day “God” paid a visit to his cell. In 2004, he was convicted in France, fined and given a suspended prison sentence. Wemba then returned to the Congo in 2006 and continued playing music until his death.

However it is said that Wemba’s purpose of sneaking people into Europe was never making money, but to help people who desperately wanted to leave the war-torn country was war.

“Papa Wemba was not a smuggler,” a close friend of his, Muniania told the media, “He was literally helping people trying to escape rape and death in the Congo.”

And the $3,500 per person Papa Wemba received in exchange for the scheme was simply the cost of paying people at the French and Belgium embassies to get the visas for his “musicians.”

“In Congo, if you think of the six million people that died, and women who were raped, countless numbers of abuses – the Congolese passport could not help you get out across the border and then go to a neighboring country. So something had to be put into place so people could get out of the country.”

Muniania explains that the world was ignoring the violence in Congo. “There was no institution, NGO that was helping the Congolese leave the country,” he says. To Muniania, Papa Wemba was a hero, not a smuggler.”

In 1979, Papa Wemba became the unofficial leader of La SAPE (Société des Ambianceurs et des Personnes d’Élégance, literally translated as the “Society of Atmosphere-setters and Elegant People”) which he promoted as a youth subculture in Zaire. Their style was influenced by the fashion centers of Paris and Milan. Wemba said:

The Sapeur cult promoted high standards of personal cleanliness, hygiene and smart dress, to a whole generation of youth across Zaire. When I say well groomed, well shaved, well perfumed, it’s a characteristic that I am insisting on among the young. I don’t care about their education, since education always comes first of all from the family.

Papa Wemba’s impact on the culture is also reflected by his influence on a new generation of musicians and performers. For example, Priyan Weerappuli [leader of the Sri Lankan group Pahan Silu] referred to Wemba as being among his greatest musical influences. Weerappuli claims that he was first introduced to Wemba’s music in 2004 and was “deeply inspired by the free rhythms demonstrated by Wemba’s Soukous style” and, from that point, “began experimenting with these rhythms in his own compositions.”

Many others paid tribute to Papa Wemba’s legacy after his death in April 2016. Some of them included not only Koffi Olomide and Manu Dibango, but musicians King Kikii and Femi Kuti, along with soccer star Samuel Eto’o [among others] gave testimony to his lasting influence on them.